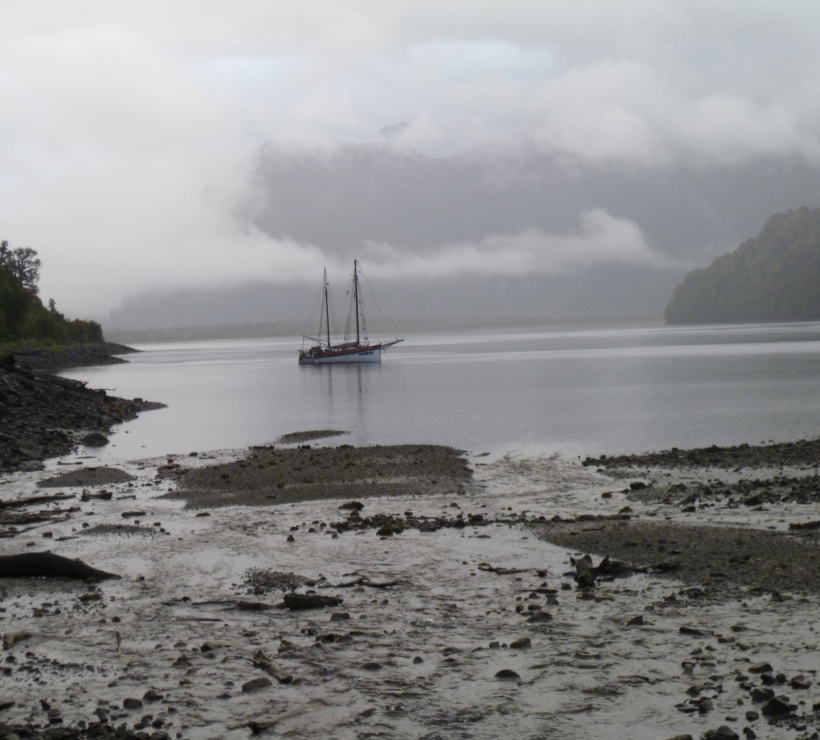 Since arriving in Chile in April 2011, we had heard a lot about one couple, Douglas and Kristine Tompkins. Together they have conserved over 2 million acres of wilderness in Chile and Argentina through their respective organisations; The Conservation Land Trust and Conservacion Patagonica, more than any other private individuals.

Buying land, to solely conserve it, was previously unheard of in Chile. The conspiracy theories abounded. There were claims that they were setting up a new Zionist state, that they would claim Chilean borders or steal Chile’s water to sell it to Africa. It appeared that many Chileans could not understand how someone could buy land and keep it wild. Not build on it, not burn it for farmland, chop it down for timber or extract its minerals. But we did and we wanted to meet the couple to find out more. 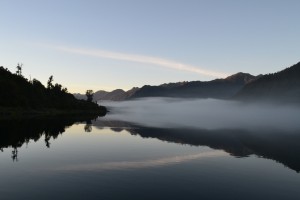 And so we anchored in one of the parks they had founded, stunning Parque Pumalin. After a week of torrential rain, filling our dinghy, buckets and boots (it is a rainforest after all) we heard that the couple were around. After a perfunctory radio call, they agreed to talk to a pair of complete strangers in their home, amongst their friends.

Luckily, I had dived over board and washed in the frigid dinghy water that morning (nearly loosing feeling in my toes and head in the process) and so was vaguely scrubbed. We jumped into the kayaked and paddled. Three Magellanic penguins and one great egret later, we arrived at their flooded field and tied the kayak to a fence.

The half hour chat unravelled into hours, in a surreal evening where we found ourselves sitting amongst fat speckled hens chatting to Kris; discussing Snowdonia with Amory Lovins, one of the world’s most renowned renewable energy experts and discussing how one “talks ape” (no, really!) with an eclectic group of  conservationists under the sleeping eye of the Andean mountains. 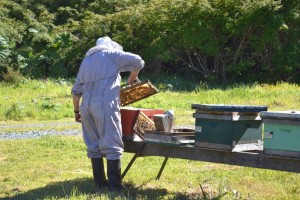 What they have achieved through their Trusts for conservation as well as providing sustaniable employment for local Chilean and Argentinian people, is utterly monumental. We met Mechoy, the apiculturist smoking his bee hives. He told us about his colonies, how they produce the purest honey in the world from rainforest trees like Teniu and Maniu and that he has worked in the park for twenty years. Over ninety local people are employed in the park: from folk growing native tree seedlings, tending the organic farms to maintaining the trails. The temperate rainforest drips with life, from the industrious Magellanic woodpecker, to the mighty alerce trees, to the huge russet bumblebees pollinating the native fuchsia plants.

Major deforestation began in Chile in the early 19th century, with thousands of hectares cleared for crops, livestock, towns and railways by European settlers (estimated >20 million hectares, with 15 million remaining). A huge rainforest of ancient alerce containing the largest and oldest trees in South America in nearby Puerto Montt was burnt down. The land proved much too swampy for cultivation and pasture and still lies fallow today*. 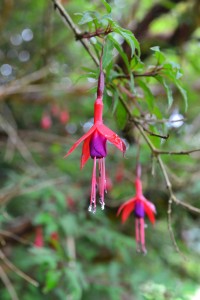 Walking though the verdant forests of Parque Pumalin makes one realize just how lucky we are that someone cares.