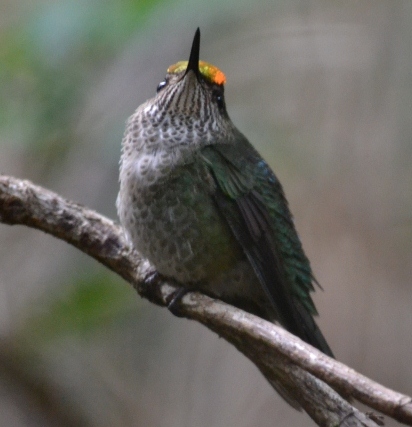 I had never seen a hummingbird before we sailed to the Eastern Caribbean. Then suddenly, a tiny bundle of feathers darted through the shrubbery, with a flash of his emerald crown, incredible! So tiny, such rapid wing beats and decadent plumage.

This first meeting was with an Antillian crested hummingbird. There are about 320 species of hummingbirds, but they are only found in the Americas. The tiniest species, the bee hummingbird, is found in the Caribbean in Cuba. This is the only place in the world where this little sparking bird is found. It is only about 5.5.cm, smaller than my little finger and 2.g in weight! It is the smallest living bird in the world and is in good company with the pygmy shrews, the smallest mammals in the world.

Now having anchored along the shores of South America, we have found ourselves in hummingbird heaven, with the greatest number of species in the world. Venezuela alone has 103 species. Here in the Andean foothills lives the largest hummingbird on earth, the Giant Hummingbird, but at only 20cm long and 20g (less than a 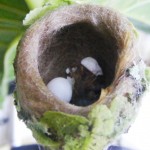 sparrow) it is hardly a heavy-weight in the world of birds!

One of the most striking aspects of hummingbirds is their plumage, which glitters and sparkles with the play of light. This is due to the structural interference of light striking their feathers, rather than from pigments. In the photos of the green-backed firecrown, found in Chile and Argentina, the effect of the light almost suggests that you’re looking at two different species! 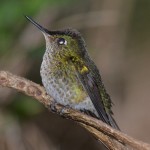 gbird are generally the “flashiest” and defend territories or “leks” displaying their glory to scrutinising females. These territories are often composed of a selection of nectar rich flowers. In Jamaica we watched the incredible endemic red-billed streamertail (13cm long streamers) diving at anything/anyone that came near his array of scarlet hibiscus!

Indeed hummingbirds are very partial to orange and red colours. When sitting in our big fishermen’s oil overcoats and trousers they have zipped over to the incredible crimson bonanza… only to be met by two ugly humanoids! 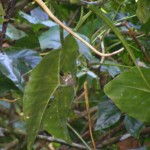 s sip nectar and are important pollinators, but also catch insects for protein. They dash around like buzzing helicopters with their unique 180° wing manoeuvrability, allowing them to fly backwards, up and down and hover. Up to 80 beats per minute have been recorded!

This fraught action and high metabolic rate means that hummingbirds in high latitudes and altitudes must fall into torpor during cold nights to maintain warmth and reserve their energy.

Their nests are made of spider webs, lichen and mosses and spun into a tiny cup. We found one under a leaf in the Orinoco Delta, Venezuela (the nest in the photos is under the huge elephant leaf with a female brooding, difficult to spot!). The two tiny white eggs were smaller than the size of my little finger nail and are the smallest eggs laid of any bird. The size of the naked, but slightly orange-haired chicks was revealed when a mosquito landed on one 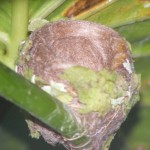 of the chicks and almost dwarfed it! I’m just not sure how many blood meals these minute little chicks could provide!

Hilty, S. L., 2003. Birds of Venezuela. Second Edition. Princeton University Press, Princeton and Oxford. (This guide is huge, but AMAZING! The best in South America I have yet read)