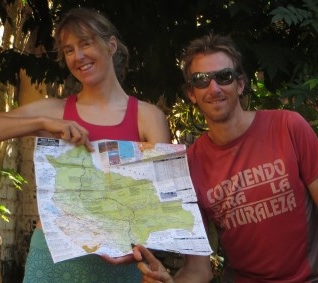 British adventure-running couple, Katharine and David Lowrie, are hoping to run into the record books after completing an unsupported and gruelling 1,187 mile run across Bolivia, a country four times the size of Great Britain. This is the first time this feat has ever been attempted.

Due to the vast wild areas the pair had to run through, they pulled all their equipment, plus food and water supplies behind them in a trailer they made from recycled materials.

“It’s a love-hate relationship with the trailer”, said Katharine, “At times I wanted to throw it into the caiman-filled creeks! It was like pulling a plough, especially through the mud, sand and pot holes of the 40% of the route on dirt roads. On the other-hand, it was our life-line, allowing us to survive in really remote stretches of the Amazon basin, with temperatures soaring to 40 degrees Celsius and near 100% humidity.” 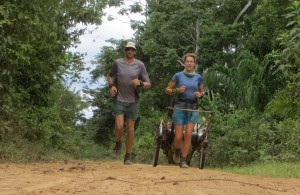 The run across Bolivia is part of a larger expedition for the pair, who are seeking to be the first to run the length of South America unsupported.

David explains, “It’s a dream expedition; to run through some of the most biodiverse and climatically challenging areas on earth. And it’s been amazing to run in the company of river dolphins, capybaras, howler monkeys and fireflies. But we also want to remind people about how much of South America’s incredible wild lands and wildlife are threatened and that there are small steps we can all take to conserve them”.

In addition to running and recording the wildlife they observe along the route, David and Katharine are raising money for Asociacion Armonia and their partner Birdlife International, who are conserving habitat for the critically endangered Bolivian blue-throated macaw. There are only believed to be 300-400 individuals left in the wild, due to habitat loss from cattle ranching and the illegal pet trade. Protection of the parrot’s seasonally flooded savanna homes in the north of the country also ensures habitat for other threatened wildlife including maned wolves and giant anteaters. 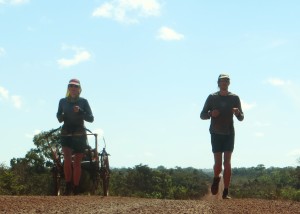 Every day, the couple chatted to ever curious passers by, schools and local communities, “After overcoming the general shock of two strangers running down the road with a trolley behind them, the local people were extremely warm; plying us with maize cider and filling our bags with oranges and grapefruits. Aside from asking where we had come from and how many children we had, they were incredulous to learn that we slept in the forest, constantly asking us were we not afraid of venomous snakes and jaguars?!”.

Indeed, not all their wildlife encounters were positive. Much of the territory the couple ran through harbour tropical diseases and it was a constant battle to keep the mosquitoes at bay. Ants raided their food supplies, cut holes in their equipment, while wasps and bees repeatedly stung them. 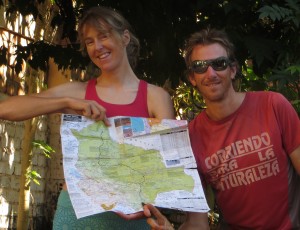 “We’ve learnt a lot about running big distances day-on -day in tropical climates and the challenges of staying healthy whilst living by the roadside with no shower or bed. We suffered from prickly heat, gastro-intestinal infections, flu and I had a particularly delicate case of crotch rot!”, said David

Now the husband and wife team are setting their sights on Brazil and Venezuela in order to complete their 6,500 mile running challenge.