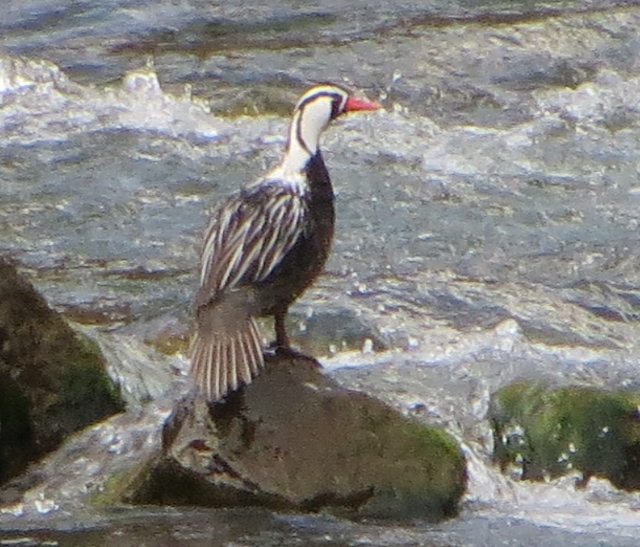 Very excited! Today we saw a bird we have both been hoping to catch a glimpse of for ages…..a torrent duck! Or pato cortacorrientes here in Los Glaciares National Park, Argentina

This little fellow has the stout tail of a cormorant and the finesse of the ‘bobbing waiter’; the European dipper. He has a striking white head and neck with saucy black streaks.

His “Senora” disappeared rapidly with a whirr of wing beats upstream, flicking the white-water torrents as she bombed past. Her retreating shape did, however, appear disappointingly brown.

Determined to see more of this pair whom we have searched for along many a gushing river to no ends, we abandoned the trailer and nosed up the river. Huh! There on the boulder the jazzy pair were. It seemed the Senora was “wearing” in fact a sultry cinnamon gown, no brown to be seen! A bold black and white “cape” finished her ensemble and like her fellow she sported a lovely tangerine beak and webbed feet! 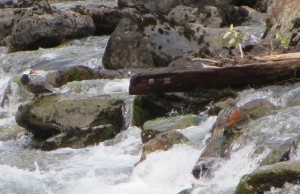 They preened on the boulder together in apparent marrital bliss. Then with a splash she was in; jostling up river like a prize boxer! She bounced over waves, with a left hook, shot under, then over rapids and with effortless agility popped up onto another rock. Incredible! Soon her man was in full persuit with similar finesse.

It seems the “pairsomes” (with sometimes a young ‘n’ in tow) prefer fast, clear water; with prime real-estate being the white-water cascading streams of the Andes. They have become experts in shooting up-stream in pursuit of their prey and one another it seems. I’m afraid their super-aero-aquatic display would leave any kayaker floundering…