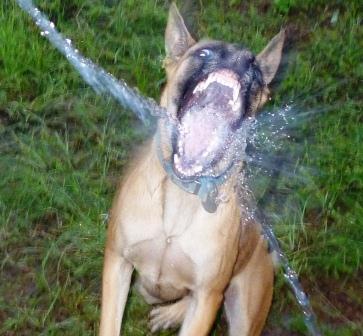 Our training ran into a problem last night. . . Dogs!!! We set off later than planned and ended up heading out through the suburbs of Juan Lacaze in the night time. As a runner you create a level of unwanted attention at all times, normally humans being the biggest issue. But at night time, with species that rely on sight as their primary sense at a distinct disadvantage, it is those animals who can switch to their other senses that are the winners, like Dogs! They know we are about 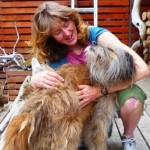 long before we can spot them, and their instinct as you pass the border of their lair through the darkness isnt to roll over in a docile fashion offering up their soft bellies for a rub! Oh no, on several ocassions dogs large and small unleased a volley of growls and aggression from seemingly nowhere, and leaping back and yelling in return we had no way of knowing whether they were tethered or not, or had a bite as bad as their bark.

On bikes we have both been bitten in Chile, actually by the same dog unbeknownst to eachother, within half an hour! This in a town where the balance of power has shifted so far to the side of stray dogs that its is not uncommon to read of packs savaging sleeping drunks to death at night. Ow. And with rabies everpresent in South America, just one bite, one scratch, one lick could be enough…. 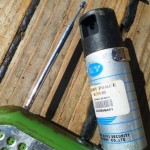 – whats the story? Irrespective of the cover of dark, how the heck are we going to defend ourselves against “man’s best friend”? I once read that bearing your teeth and widening your eyes works?! Our only two ideas thus far are pepper spray, which we’ll have in a holster on the trailer harness, and a metal retractable radio arial to use as a whip – any other tried and tested techniques?

Look forward to hearing from you – and thanks in advance for any insight……!