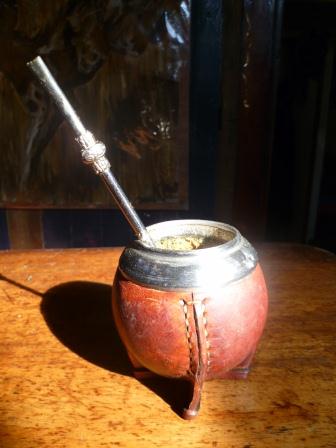 Famous Proponents:         Charles Darwin, plus 90% of Argentinians and Uruguayans

Yerba Mate is everywhere in Argentine and Uruguay, and Chile and Brazil to a slightly lesser extent. It’s a way of life. Whether on your way to work, greeting friends, driving a car or bus, young, old, athlete and archair dweller alike its not long before 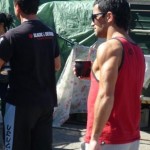 you spy a flask of hot water, a curious gourd-like cup, and even more curoius metal straw (bombilla), more often than not tucked tightly under the crook of the left arm. In a world ever more homogenised it is a fiercely held cultural idiosyncrasy. 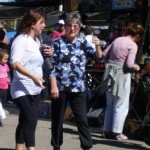 The traditional method is to mix a copiuos amount of leaf in a leather bound gourd, or wooden cup, with a less copious amount of water and sip through the specially designed sifting straw. When the water runs out, more is added. I don’t yet know if it is rude to allow the straw to make a slurping/guggling/guzzling sound as the water runs out – I shall monitor this topic. It seems customary to drink it at all times of day although  a peak can be found in the morning time.

The taste is bitter, aromatic, astringent though not easily described.

Like marmite (which it is not) it’s not to everybodies taste. Infact in surveying gringos it would be easy to assume it wasn’t to anybodies taste! Kath cannot abide it. I love it. The taste, the ceremony and the effects all conjure up the South American way.  I don’t drink too much coffee and I find the caffeine is more gentle in its effects. I have not found it to be addictive at all in the quantities and frequency I partake (1 cup a day). For the endurance runner it is said to be a safe (and legal) way to get a lift, and also yerba mate tea appears to increase the supply of nutrients and oxygen to the heart during exercise  though I think I need more time with it to offer any comment on that – I havent noticed it yet.

Of the anti-oxidant benefits, during lab analysis it has been shown to contain more anti-oxidents that green tea!

What about that downside though? In a recent posting called “Yerba Mate – Health Drink or Health Risk?” researchers have tried to discover if it really is the next best thing and recently reoprted that if prepared in the traditional way and consumed in amounts typically enjoyed by South Americans who drink mate, the intake of certain carcinogenic components was comparable to what a person would get by smoking a pack of cigarettes per day!

my sleep was very deep and refreshing

The final word goes to Charles Darwin, who like many gringos thought he’d have a go . . .

He writes in “Voyage of the Beagle” that, “We arrived at camp during the night, and after drinking a lot of Yerba Mate, I prepared to go to sleep. I was surprised to discover that my sleep was very deep and refreshing. Although the wind was very strong and the night was chilly, I never slept more comfortable”. Darwin goes on to note that he “had the most profound dreams as a result of drinking the tea.”                                        Source Link http://ma-tea.com/pages/Cautions.html