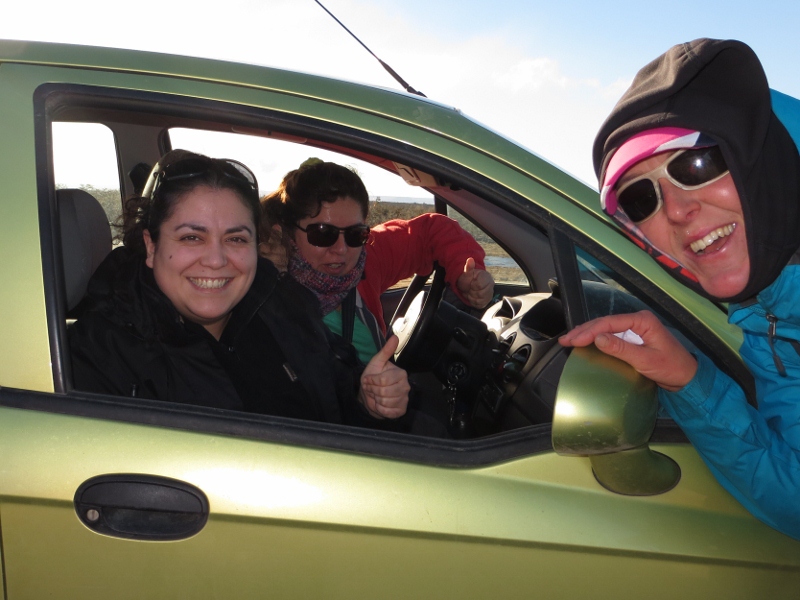 Friday: the snow was slicing horizontally. Attacking the tiniest glimpse of flesh we dared to expose. The wind hammered like a jumbo jet in our ears. I kept looking around. Expecting to see a lorry bearing down on us, but it wasn’t there, just the wind. People had told us about Patagonian wind; that it stops cars in their tracks, grounds motorbikes… Now we were feeling its full blasting relentless attack.

My balaclava and scarf revealed only a fine slice of the world. But suddenly, through that slice I saw two red car lights, then the lime green tint of a little car. Someone was pulling over. We automatically homed in on them. Snow spun into their warm world. Two broad smiles offered us a ride to Puerto Natales. Imagine?!

But it’s simple, there are no lifts for us, unless we want to return to exactly the same spot. There can be no gain, other than our own four legs and the trailer’s two wheels. We shook out heads, but enthused how amazing it was to speak to them. They told us they were visiting friends and that they would see us on the road again. Wonderful.

We yearn for human contact. Whether car horns, thumbs up, victory “v”s or the hallowed human words; it starts to all feel worth it again. We began to dream about seeing them, but soon stamped on the idea to protect against disappointment; all kinds of scenarios could prevent it.

Sunday: Late start after the 23 miler the day before. Plus it’s difficult to face the morning freezer. We are, however, developing a lightning speed drill for changing into running gear before our fingers turn blue.

On the road and there’s a miserable biting wind. We shove our hands into fists and let the glove ends dandle long. We watch ice launch into the air from a river as the wind pelts it. Extraordinary; I thought it was terns at first. I’ve never seen flying ice before.

Then they arrive. Two little white lights, a green tint and they’re pulling over with broad grins! We run over. They haven’t forgotten us. Tabata Alejandra and Lillo Bricen’o plunge two empanadas, two milkshakes and an apple juice through the car window! Can you believe it?! Wow. Human kindness. They have made our day.

It’s still Sunday. I am tapping in the tent. A layer of snow has just slid off it. The stream is gurgling; not quite frozen. Otherwise all is still. Just Dave by my side sighing in his dreams of our two little “angelitas” and the best empanadas and milkshakes in Patagonia! 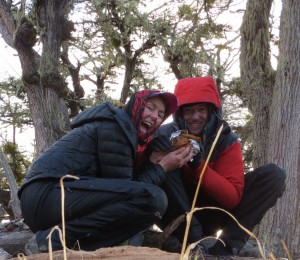