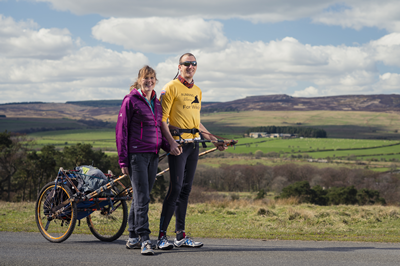 Dave and I are heading south this Friday 15th August. We’re catching the train to Rutland for our last migration (sadly not on foot!)  before the baby arrives in mid September (hopefully she/he doesn’t surface before!)

We’re joining forces with Swarovski-optiks our binocular sponsor for the expedition & will be presenting, “Running with Parrots, Anteaters & Snakes: 6,500 miles across South America” on Saturday @16.30. We’d love to see you there.

And best of all it’s all in aid of conservation. This year the money raised will be channeled into conservation of our Oceans- one of the earth’s forgotten wildernesses.

BirdLife (one of our expedition charities explains):

“The oceans cover 70% of the earth’s surface yet conservation actions for the marine environment lag far behind those of terrestrial systems. Globally, only 1.6% of the oceans have any form of legal protection, compared with 12.9% of the world’s land surface.

However, much of the conservation action needed to address this will happen initially not on the open seas but in international policy meetings and workshops. Birdfair will fund the vital input by BirdLife marine policy staff and BirdLife partners to these gatherings, notably in Europe and Africa but also seeking to protect the oceans around Antarctica and on the High Seas.

To help inform this process, Birdfair funding will support the completion of the Important Bird Areas Inventory for Antarctica and the production of practical guidance for managing Marine Protected Areas. It will also support steps to increase awareness of marine conservation issues amongst policy makers and other stakeholders, with particular focus on the Mediterranean, the West Indian Ocean and the NE Atlantic.

This project will potentially benefit all seabird species; however, it is likely to be focused on the most threatened including: