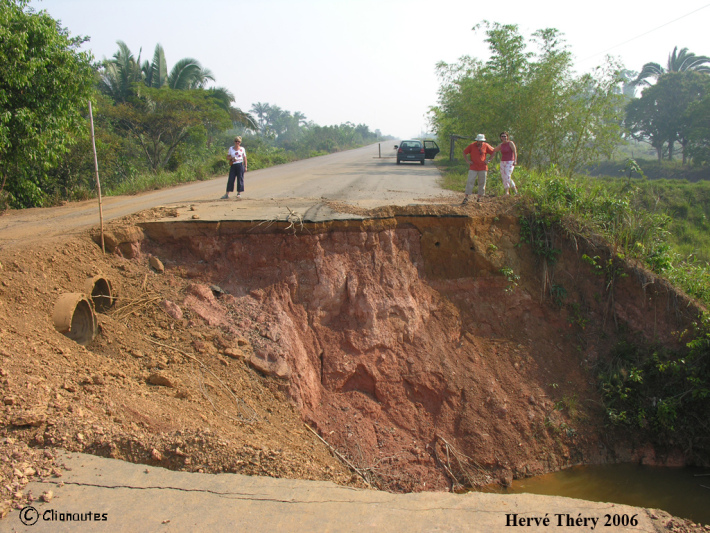 The Route: The Infamous BR 319

In reality, we are trying to run to an island. On a Brazilian roadmap you will not encounter distances to Manaus, because it is effectively an island, and you can´t simply drive there. But is has not always been that way. In the 70´s, the military goverment sought to connect Manaus to the rest of Brazil  and so was born the BR-319, a part of the mis-guided Transamazonica network of roads designed to populate and exploit resources in Amazonas state . For once though, the dream and the reality couldn´t see eye-to-eye. The bungled build project, the lack of demand for the new road, and more importantly the ferocious resistance of the mighty Amazon climate have seen the road reduced to a slushy mud bath, asphalt washed away, bridges failed and  a generation has gone by since the last scheduled bus service dared make the journey in 1988. It is reported that hotels and service stations built to cream off the new demand sit derilict, silent witness to the Amazon Rainforest´s resistance.

It is still on the map though, and we are going to have a go at passing this, one of the most famous roads in the world! Click on the map to discover more.

What can we expect? Well, researching has been tough. We have the current state assessment from the Transport department, which even to my untrained eye looks a little untidy. But also we have testimony of all the people we have met since arriving in Brazil, many of whom say one can pass. A key witness has been a cyclist friend who has just passed through proving it is possible. Many others have said it is impossible and impassable, because of, amongst other things, the presence of jaguars. We are running for wildlife and wilderness, so we hope they are right!

Just one of the photos from google – type in ´´BR319´´ and search images, if you are about to try and run across it unsupported you may find the images a little disturbing…!

Technically, we are in the dry season for this part of Brazil (May-Dec), so this is the optimum time to attempt a crossing of this route.  By dry it just means it rains LESS (only 17% of days) and is more likely to have clear skies. On the down side it also means it is the hottest time of year, with plenty of nose burning opportunites, as evidenced already!

Humidity has already been a problem thus far in Bolivia and Brazil (we are in Humaita), and wringing out our running tops is very normal. Sweat sluices off us after about 0830 in the morning, and continues ´til the day is done. In these conditions we are struggling to avoid rashes and rubs on our skin, some in tender places!

When the rains do come, typically in the afternoon, we will have to be ready with some soap. Nothing like a tropical shower to rid the days running grime!  Actually, anyone who has travelled here will know it can be be relatively cold during afternoon downpours, so hot milk on the MSR is the plan.

We will be lucky to meet truly indiginous people on this route, given the history of development in the past. There looks to be a settlement after 100km, called Realidade, then various small clearings for the following 100km. After that, for the next 350km it looks like more or less pure rainforest and the road is in disrepair. Probably some poeple will use the road, legally or otherwise, to gain access to the forest which is still intact  we hope. This is an unnerving prospect, but we are getting sick with excitement to see what lies ahead. 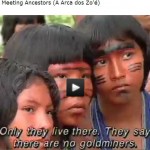 The final 100km is civilisation, by that we mean that man has cut a lot of the surrounding forest, which I suppose isn´t that civilised. The soils here are difficult to work with but the land grab is evident from aerial images. We are provisioned to pass through but if we are short of anything we can re-supply from locals.

In researching this section I did however unturn the following video, a tribe who we will not be lucky enough to meet, but who offer a window into a world that exists behind the closed doors of the mighty emergent rainforest trees. It is the moment when one tribe interviews another in a unique project in the 90´s to gain insight into tribal behaviour. Worth a watch, Click the image to bring it up in YouTube

21 days autonomy: food, medical supplies, and at times water supplies, plus our normal enormous entourage of kit. Too much for our current trailer. A second trailer has been born today to cope with the load, at least until we have eaten through some of those meals!

Anything for us to worry about?

We are running into a remote area, but not without human contact, and a road that may or may not be passable at the moment. At the extreme end of things this of course has consequences for a medical evacuation, but as always, and with the second trailer, we are well prepared with both food supplies and medical kit, more than one could be for an ultrlight run on the hills!

Regarding wild animals, we shouldnt have to worry, they typically have much more fear of human beings, rightly so, than we do of them. We carry a deterent spray for this, and various tricks for removing venom from snake bites, but in reality this is one of the reasons we have come here, to see what we can of wild beasts while they can still be found in vast chunks of rainforest! In our experience there are only two things to worry about, ants and mosquitos. Mosquitos because they can kill you, and ants because while you doze off for the night reasting your wearing running legs, they set to work carving up your gear to make a nice camp with!

Water should be plentiful, but we have capacity for nearly 30 litres if we can find the will to carry it!

The most likely problem we are likely to encounter is mud, dangerous only in that it may slow us down greatly and put pressure on the supplies we are able to carry. We are in the right season to atttempt this run, and we shall see haw our little chariots cope with it all.

. . . that is the plan anyway . . . what could go wrong on a nice little run through the world´s biggest rainforest?!