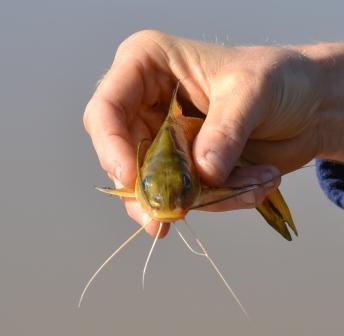 Sods law. Katharine dropped her sunglasses off the side of the boat – nothing unusual in that (we are cursed with sunglasses )– it happens a lot unfortunately. They were cheap of course but have now become rubbish too (they always were, but now they are officially “litter” on the riverbed by our boat) and therefore we conjured a plan to collect them.

Two vital pieces of context before we continue are that a) we are hopeless fishermen – we couldn’t catch a cold as the saying goes….. and b) our evenings have been plagued by strange sounds coming from the loo recently – grunts almost, very disconcerting, but all would be revealed….

To the task – we don 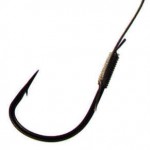 ’t let anything that cant be safely eaten by a fish go into the sea, ever, so our mornings tasks were shelved and cunning plans concoted to retrieve the cursed things.

Fish hooks were tabled, but are difficult to draw across the bottom and unlikely to scoop the glasses. Kath nobly offered to swim down and scan about, but without fear of exageration, you cannot see beyond your nose in the muddy brown water and her relief was palpable that this suggestion too was consigned to the junk folder. What about uncle Johns throwing net? Hmm, could work? A series of lead weights cleverly arranged around a large net and guyed through a ring to draw the net closed on collection, it’s a sort of mini purse-seine (highly indescriminate way to catch fish) and has been aboard since we left england 4 years ago. It would be very at home silhoutted across a large and low glowing sun in the hands of a ancient tribesman on lake victoria, used with deft ancestral skill – but what about in our club hams?

The first throw was a disappointing show. The net momentarily spread in a glorious arc as intended but, as it hit the water, the guy snagged on my foot and as it sort of collapsed pathetically into the brown abyss, as did our hopes. Confidence slightly dented by the lamentable effort and the slimy brown mud we had “caught” we nevertheless swished it out again and this time it dropped to the river bed, more or less as planned. We carefully drew it together and as we lifted it, it wiggled, not the reaction we were expecting from the plastic sunglasses. And again. Defitinely not eye wear this time. As 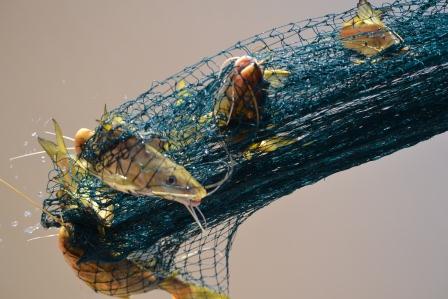 ed from the water and to our utter amazment 9 …… yes,NINE catfish were embbed in the net, and they were shouting at us!!!! Audably croaking, grunting, swearing and blaspheming about being dragged from the deep!

By the time we had returned each slippery, whiskered, gasping catfish one-by-one and then painstakingly untangled the triumphant net we both had bleeding cuts on our hands from their sharp fins and were not about to dredge up more. So with some embarrassment it is that we confess that the rubbish remains (we WILL get them somehow!!!) but at least we’ve finally explained who has been seemingly loitering noisily in the bog!