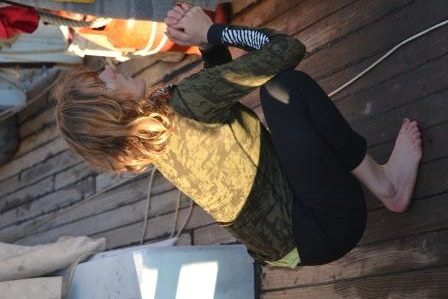 There was the burning stitch during school cross country runs; triathlons of endless hills, followed by exhaustion in a swimming pool.

Then when I was 17 and stressed with exams I started.

First just around the field, then through the coppice, perhaps up the lane too? What about heading to the river? Before I knew it I was running for hours, following the tracks of deer, crunching in fallen leaves in the woods, crawling through frosted hedgerows; ankle deep in mud.

I loved it, it became effortless. First my brain would chunter through study problems, but soon a bird or badger would catch my attention and thoughts of exams or study would dissolve into the real world by my side.

Running provided escape, exploration. In a car you lock out at the world; blind, deaf, senseless. On your two feet you inhale it, absorb it. The car haze redefines itself into a piercing image. 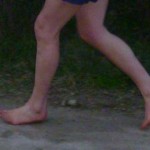 thers feel similar. Whether it’s, “Having some ‘me’ time”, for a parent or “Time to switch off and listen to rhythm of my feet”, for a harassed city worker. Wherever you are you can do it; humans have been doing it for millennia after all.

One of the finest points about running is there’s no equipment; all you need are a pair of running shoes. Well that’s what I thought? For the past month we’ve even started leaving them behind.

We’ve been looking into this mysterious art for some time. Scanning websites, speaking to other runners; we read Christopher McDougalls’ acclaimed ‘Born to Run’. The ‘mysterious art’ was starting to make plain sense,

“Righto Mr Primeval savannah man, your feet clearly weren’t made for what they’ve been performing very nicely at for centuries. They need a little straitjacket each, with a nice heavy wedge under the heel, so that you can’t stretch your Achilles anymore. This will allow your gait to change so that rather than landing on your forefoot, you can heel-strike instead. It is time you last a sense (you will soon lose all of them after all) the one that connects you to the ground and tells you how your feet and movement’s feeling. Forget ‘feeling’ the earth and the stones under your feet, forget navigating by them, modern man has the solution.”

Zoom on a couple of centuries to a couple of average runners and the prophecy has been fulfilled,

“In a nutshell, you are both heel-striking, have slow cadence, poor posture, braking with every step, potential for injury high… Your feet will be weak due to constricted shoes and calves/achilles shortened due to heel lift …” , Jonno Gibbins, BareFoot Coach, UK

Suddenly running was no longer so easy. No longer a matter of one foot in front of the other and seeing what’s over the next horizon. We were three year olds learning to run and yet I never thought you had to learn to run! We began thinking about every foot fall, short quick foot falls; remembering to run tall, to look ahead, to keep wrists, ankles and shoulders loose. How do you keep your ankles loose?!

I found myself running with my tongue out, heaving with concentration, as I aimed on hitting the ground with my toes. This wasn’t right either,

“If you ‘try’ to land on the balls of your feet you are likely to over plantarflex and kill your calves”, Jonno Gibbins.

We were finding running the “barefoot” style in cushioned trainers pretty impossible. So we ripped the insoles out of our old shoes and started splicing runs with short shoeless sessions; minutes at first.

“Hard ground is better (than sand) and there is more feedback from those sensors in your feet. If you heel strike on hard ground you will know about it and adjust your technique accordingly”, Jonno Gibbins.

Having said that, we’ve along way to go and we’re both petrified of injuries. Our old style of running would no doubt have precipitated injuries during the 5000mileproject, but retraining your body and its muscles takes time,

“The problem is that your body has adapted to running incorrectly for years and it will take time to teach it new tricks”, Jonno Gibbins again.

Yesterday, our training plan received a boost. A package finally arrived at the white house (lot of those around here) with the tame Monk parakeet that flies in and out with nesting material and a TV the size of the wall. David found the ‘white house’ and on the second attempt the shoes; Vivobarefoot ‘Breathos’. They’ve been gifted to us from the company along with two other pairs each. Now we can run without ‘platforms’ in our new running ‘slippers’ with no worries about acacia thorns or sharp pebbles. We will no doubt still need to splice in the old cushioned trainers as our bodies adjust and then readjust again to running with the trailers.

Now I’ve felt mud squishing between my toes and started to ‘read’ the local track through my feet. Perhaps it’s not bare foot running that is the ‘mysterious art’, but trainers?