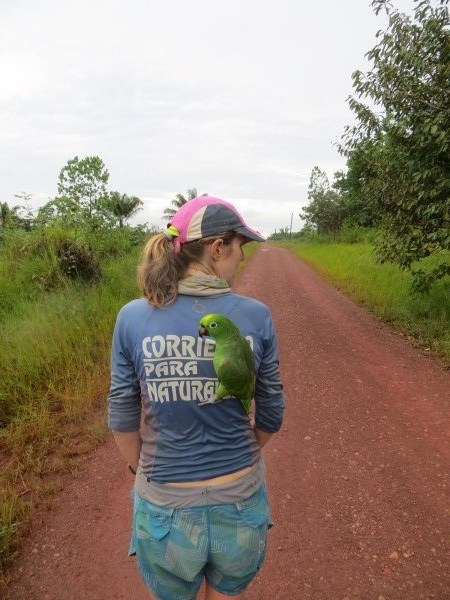 Yesterday I was at a really low ebb.

We had run nearly 18 miles and the thought of the next four we planned to run was just hideous.

Sweat was pouring off my limbs, my feet felt jarred and knees hot and sore. My chin was heading for

the floor as I ran curled up, tired, terribly, with my feet like claws. My running style was desperate, ripe for an injury.

When we finally hit the 24 mile mark, I collapsed into tears, annoyed and frustrated. After over 5,400 miles how could this happen?!

The truth is, it has never been easy. Usually after about mile 15 it begins to hurt, with the next 5 to 10 miles demanding determination and often a good dollop of Dave´s eddying words.

But some rare days, I just feel ontop of the moon. Whether this is due to food, a better night´s sleep, the preceeding day´s run or a good psychological state… I still haven´t worked it out.

Today, was one of those days. Another 22 miles was planned, the tenth day of continuous running, with a rest day planned for tomorrow.

It had been pouring with rain. We crawled out of bed later than usual to avoid a complete soaking, which often leads to painful rubs.  After a 1/2 hour warm up we charged off under a leaden sky scored with drizzle.

I felt great: quick, light steps, head held high as if pulled on a string, heart ´pointing to the sun´, pelvis powering forward. Yahoo,  could this last?!

Orange-winged parrots were gurgling in the tree-tops around us. Their croonings and chortlings had accompanied us every day on this road we had now run three times. A lineated woodpecker swooped passed, in his distinctive undulating flight, before stopping off at a trunk to dine on a grub.

Then suddenly something swooped down for Dave´s head.

What on the earth was it? We looked up…

A gorgeous, vivid-green, mealy Amazon parrot (Amazona farinosa). He looked down at us from his leafy perch, craning his neck, gurgling apparently contented sounds. We chatted back to him, running backwards, watching him.

And he followed! Continuing a pattern of dive-bombing Dave and then flapping off to a perch.

I stopped to do up my shoe. Before I knew it, he was on my back!! I couldn´t believe my luck, I was in utter heaven. 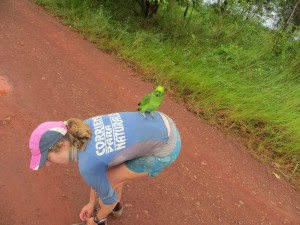 Gradually, I stood up and as I did he walked up my back to my shoulder. For someone who loves wildlife, for someone who loves birds, well this was just too much. One of the best moments of my life! We walked on, forgetting about the run and he sat, apparently contented.

First he nibbled my cap, then my ear. Clearly I had not done a good job of preening this morning. He was so gentle. His  powerful and impressive beak was thick, rounded and strong; built for cracking palm nuts and could have easily cut my ear in two. 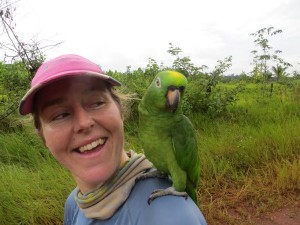 What a perfect partner!

I tried preening him back, but he squealed. It was clearly far to forward a move at this very early stage in our relationship!

And so we walked on together. Then suddenly I slipped in a puddle and he was gone. Flapping to a tree by the trackside. We called at him as we ran up the track. Dave was sure he would still be there when we ran back. But he wasn´t. Running on, we saw him one more time, he swooped over our heads, but even though we both bent over, he didn´t flap down.

Oh to have a mealy parrot with us as we ran, flying free at our side or perched on the trailer. It would be  stunning. Even as we supposed, that he is a free-roaming pet, but with no comrades to preen him; he is in his natural home, his habitat and the climate he knows; the steaming Amazon.

Running with wild parrots, parakeets and macaws, has been one of the most breathtaking and eddying features of our run. They have pulled us out of lows and terminated arguments. We have grown to know the different species and their behaviours, watched their tumbling raucous flocks on high, couples preening one another, feeding their young, excavating nesting holes.

For far to brief a time we have had a priviledged portal into their lives, running through their world.